Sew What?! A Trivial Tropical Frock

I certainly hope that I don't convey too strong an air of expertise on any subject.  The sad fact is that, like the effervescent Ms. Lee sang, "I know a little bit about a lot of things."   I have a solid Jeopardy-esque knowledge up to about the $600 level; after that, I feel particularly proud if I happen to phrase the correct question - if I remember to phrase it in the form of a question at all.  I can die a happy man if I get Final Jeopardy correct before the last "bum-bum" of that anxiety-inducing music.

Having a broad base of trivia clogging the cortices (I learned that one from Jeopardy) of my brain makes my authority on the subjects to which I can speak, well, quite trivial actually - especially sewing.  I try not to get so intimidated by the glory of the garments produced by the unbelievably-talented sewists/tailors/seamstresses with which I am acquainted via blogs and in real life, that I give up completely.  However, being mostly self-taught, terribly impatient, and buttery of finger, I try to stick to trivial pursuits (see what I did there) with sewing projects that are low-input/high-impact.

Last weekend Tiny & Mary were asked to perform at a co-ed, Hollywood, "industry" baby shower.  Wanting to make an impression (really good or really bad is better than indifferent, right?), I decided to whip up a last-minute frock for Mary.

I had this red-on-tan, tropical-print cotton in the stash for years after having purchased yards and yards of it for $0.99 per yard at one of my prized fabric outlets.  Figuring that we are still in the throes of summer, I decided that the style and print were still seasonally-appropriate, if a little wild for a baby shower.  Never one to leave wild-enough alone, I determined that the only way to top this ensemble off was a matching turban.  In my mind I envisioned some glorious, 1940's, Good-Neighbor-Policy-come-to-life a la Ethel Smith in "Blame It on the Samba."

What I actually saw in the finished product was more reminiscent of the lovely, bahiana-style women who attended my mom and her siblings when they lived in Brazil and Panama (Army brats).  It was an odd pattern - basically an extreme A-line muumuu with the fullness appropriated by a wide cinch belt of my own making.


I don't know about you, but the front yard photo shoots that I use as the default background for every "Sew What?!" post, have grown extremely tiresome for me (usually the photos are taken as an afterthought as we head out the door to an event).  I wanted to find an interesting alternative but I didn't feel comfortable taking photos at the home where we were performing.  Requiring a quick stop at the drug store for some snacks supplies, I had a sudden burst of inspiration.  Wouldn't it be funny/unexpected to have the ambiguously-ethnic glamour of Mary's dress juxtaposed against a backdrop of cold remedies, orthopedic insoles, and enema kits?!?!?! 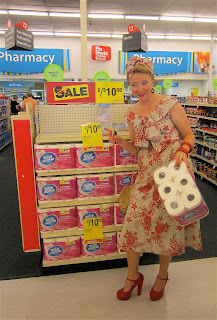 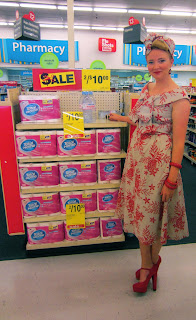 Not really...
Unable to catch my vision, Mary ended up looking
more like a crazy spokesmodel for generic toilet tissue.

Although, I do believe that economy packs were the grand prizes
offered on several Eastern European game shows of the 70's & 80's.

I blame myself really; among many other subjects, I am no expert photographer either.  Back to the front yard we go! 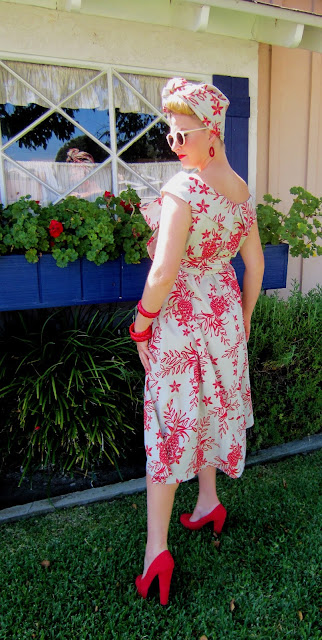