What would you do if you had a time machine?  Like a lot of history enthusiasts, it is a question that often crosses my mind.  It might sound silly and superficial, but I would definitely employ my time machine for regular shopping trips to Woolworth's.  For me, a time machine would only be as good as the history I could bring "back to the future" with me; and the things I love most are the ephemeral objects offered at bargain prices from Woolworth's - greeting cards, holiday decorations, Halloween costumes, etc.  The city in which I grew up had a long-standing 5&10, Gilbert's, but by the time I had money enough to do my own shopping, the days of five and ten-cent items were long gone.  Gilbert's finally gave up the ghost in the 1990s when it could no longer be seen through the forest of Dollar Trees.

Even at the worst of times, in my entire life I have never shoplifted.  And yet, my favorite scene in Breakfast at Tiffany's is when Holly and Paul outwit the store detective to steal masks from the Woolworth's.  I've watched the scene over and over as much for the vicarious thrill of larceny as for creating a mental shopping list (masks included) should my Woolworth's/time travel scenario ever become a reality.

Thankfully, there is a place that provides a bit of time travel without the necessity of a flux-capacitor.  In the heart of downtown Bakersfield, CA stands one of the only remaining Woolworth's Luncheonettes still in operation.  Built in 1936, the heyday for glorious Streamline storefronts, the building houses both the lunch counter and a bilevel antique store.  Excited to see a beautifully preserved retail environment and hungry from our drive, we made Woolworth's Luncheonette the first stop on Mr. Tiny's Bakersfield Birthday Bonanza!

Purists might poo-poo the paltry cosmetic updates of the luncheonette.  Rather than wasting even one calorie on negativity, we tried to burn off our lunch in high praise of the folks who keep this landmark alive with the sites and smells of 20th-Century American life!

Don't go to Woolworth's expecting a full diner menu; you will find no meatloaf, no Adam and Eve on a raft, no blue plate special.  Proving that too many choices is not always a good thing, Woolworth's Luncheonette graciously limits the options to hamburgers, hot dogs, and a few sandwiches.  They do, however, offer a wide variety of old-timey fountain treats and some of the freshest lemonade I've ever tasted.


Even with full stomachs, a packed itinerary, and daylight burning, we couldn't bring ourselves to leave Woolworth's without at least a brief exploration of the antique store's offerings.


Without the benefit of time travel, I guess we'll never get the chance to turn a pocketful of change into a Woolworth's shopping spree.  Thankfully, there are thoughtful business owners who allow the visiting preservationists within us the opportunity to experience the same luxury of luncheonette service that Bakersfield residents have enjoyed for nearly eight decades.  Thanks to Woolworth's Luncheonette, we think we've found a million-dollar baby in the five-and-ten cent store!

Did you grow up frequenting your local five-and-dime?  Have you ever stopped at the Woolworth's in Bakersfield?  We encourage you to make Bakersfield more than a mere blur as you whiz by on your north or southbound travels; take the time to time travel with a stop at Woolworth's for a soda, a sandwich, and some shopping! 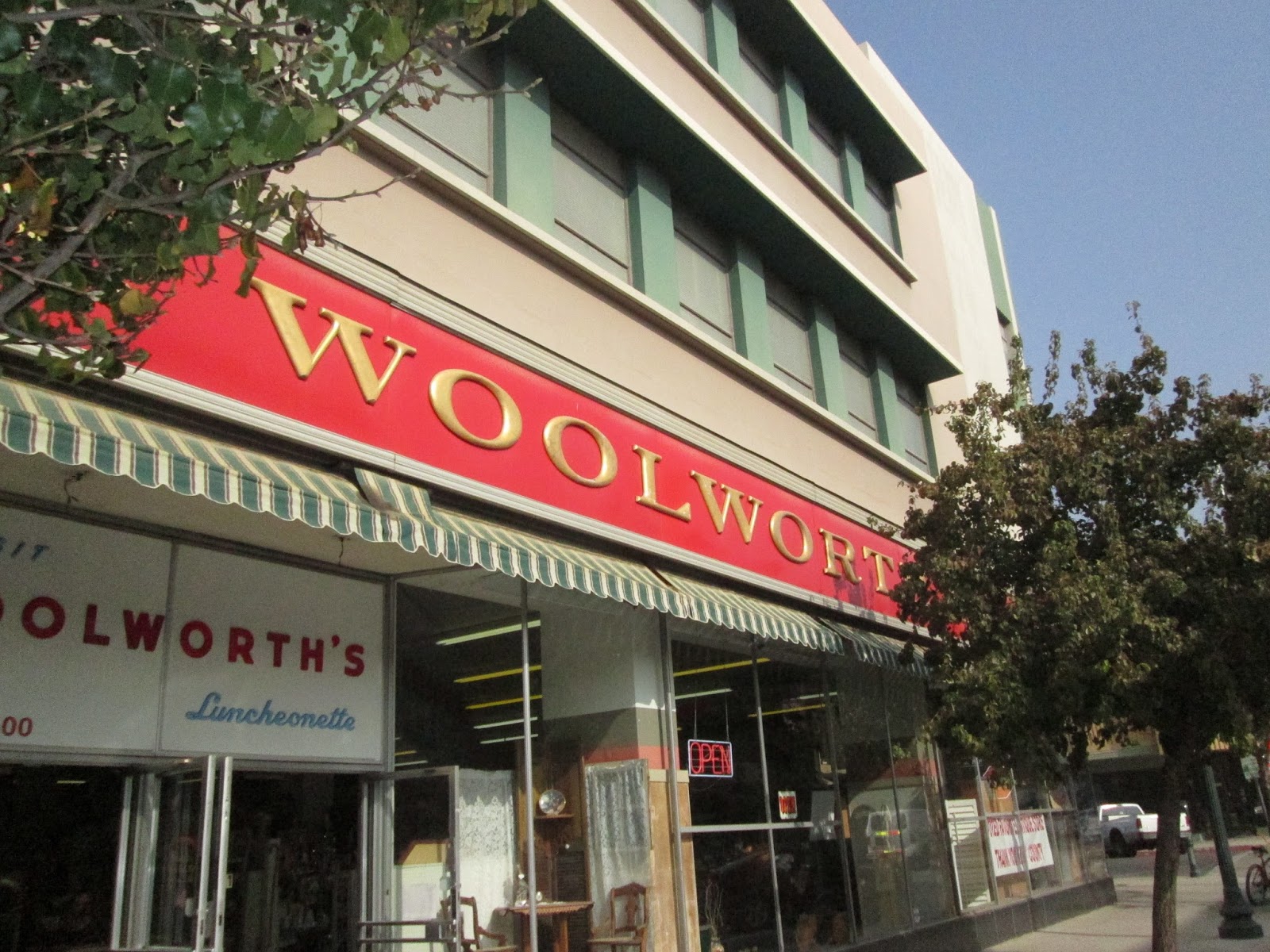