As it so happens, I prefer consuming my food from a barrel.  It has oft been whispered around the dinner table that I eat like a horse; after our feature on the Barrel of Boron, it was confirmed that the closest thing I can find to a socially-acceptable trough has indeed become my food-delivery method of choice.

And in other barrel-related news, we finally made it to Idle Hour in North Hollywood. 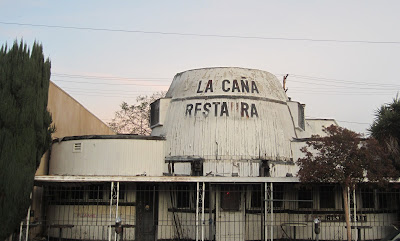 A few years back, on our hunt for Bing Crosby's Toluca Lake estate, we happened upon a barren barrel, crumbling after decades of delinquency.  The barrel-shaped restaurant was once the Idle Hour Cafe, a 1941 taproom faithfully serving the thirstiest of the San Fernando Valley's wartime residents.  In 1972, the Idle Hour changed ownership and became a flamenco bar known as La Caña.  Going belly-up in the early-'80s, the great big barrel has since remained shuttered, a forlorn reminder of Los Angeles' fabled legacy of programmatic architecture. 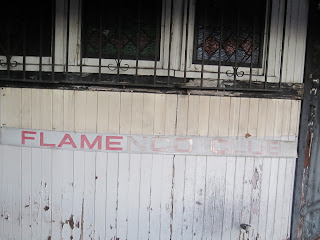 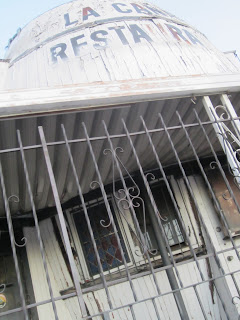 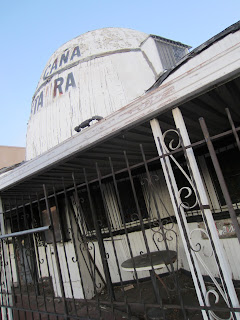 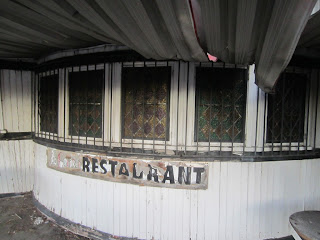 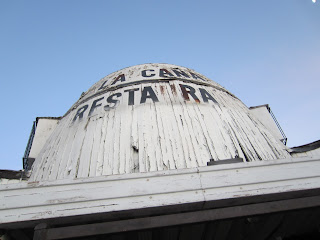 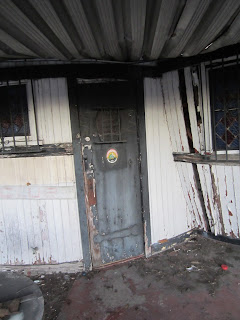 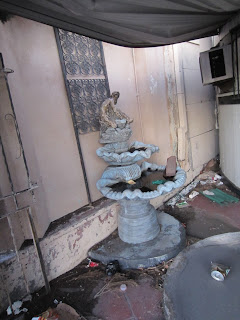 While the wacky tacky adventure team was brimming with brilliant ideas on how to bring the barrel back to life, there was one tiny, little issue; our dreams are forever woefully underfunded.  Luckily, another group of visionaries came along with both the desire and the necessary capital to resurrect not only the barrel but the original name, Idle Hour.  With its rotten siding, festering water features, and yawning awning, La Caña was essentially perfect already; on some level I wish it could've retained just a dash of its weather-beaten charm.  But in a town free of meat, gluten, lactose, peanuts, and joy, I can only imagine the outrage when a drink might have arrived with an unexpected garnish of mosquito larvae skewered by splinters covered in lead paint.

After a glossy transformation, the once empty barrel is full again - full of craft brews and a surprisingly-diverse crowd.  Who knew that an oversized barrel would become an every man's watering hole, appealing equally to the preciously bewhiskered, the vintage vanguard, neighborhood regulars, and wacky tacky turkey necks.

On the tail end of a recent work/adventure day, I found myself in the vicinity of both Idle Hour and my oldest friend.  She has been my friend since the day I changed schools in the middle of first grade and found myself in an unfamiliar classroom with an unfamiliar teacher, husky of voice who wore velour pant suits and smelled of cigarettes and instant coffee.  As I wept, I felt a hand on my arm and heard a little voice that said, "It'll be okay."  It's possible that our friendship may not have endured for thirty years had I heard the tag, "you dumb crybaby..."  Because I'm unsure of her feelings about being spotlighted on wacky tacky, we won't use her real name.  Instead, we'll call her Sharon Marilu because she is like one of those memory wizards...like Marilu Henner.  Seriously, a short time ago (for reasons unknown to even me) I found myself contacting Sharon Marilu to find out the name of our middle school librarian.  She knew it instantly.  I've already forgotten.  As Sharon Marilu is keen of memory and has known me longer than pretty much anyone outside of my family, she would probably be the one to go to should you need any dirt on Mr. Tiny (the only trouble is that she is far too kind to dish the proverbial dirt).

Meeting at Idle Hour, we second-guessed ourselves after deciding to sit outside; even at seven o'clock in the evening it was still quite hot.  We were well rewarded for our decision, however, with an inexplicably-breezy courtyard, shaded by lovely trees and Idle Hour's resident mascot.

The fare at Idle Hour can best be described as pinkies-up pub grub, ranging from the pedestrian (The American Burger) to the inexplicable (turmeric rice with mayonnaise and an egg).

If you find yourself in the Toluca Lake/North Hollywood neighborhoods of Los Angeles with an hour to idle, then make your idle hands the devil's workshop/playground/et al. and work your way over to Idle Hour.  Our visit was so pleasant that when we checked the time, we realized that we had idled away many an hour and needed to hightail it toward home.  Until we meet again, I will keep searching for more giant barrels to indulge my endless appetite for crazy roadside restaurants.  So, join Mr. Tiny and Sharon Marilu - let's "Roll Out the Barrel" one more time!!!

"Beer Barrel Polka (Roll Out the Barrel)" - The Andrews Sisters 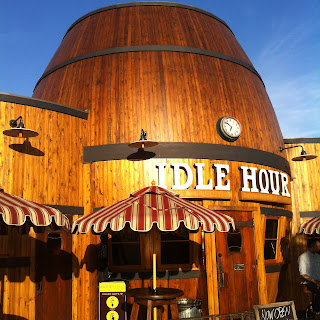