Chow Time: Roll Out the BARREL

About as far away from Niagara Falls as one can get in the continental US, in terms of both geography and climate, there exists a hamburger stand in the form of a giant barrel.  Without even a hint of post-modern irony, the owner-operators of this Boron, CA institution have cleverly bestowed it with the name "Barrel."  And while there are other barrel-shaped eateries throughout California, we are still left to wonder, why here?  Why on the desolate, wind-swept main street of a town whose dwindling population is more concerned with the crumbling economy than architectural novelties would there be a great big barrel?  Our best guess is that it has something to do with 20 Mule Team Borax as does everything - and we mean everything - in this town.  Whatever the origin, we love it.  I mean, when you find a restaurant that not only replicates your body type but serves the food required to maintain it as such, you practically jump for joy!

For a number of reasons, we didn't partake in the haute cuisine offered at the Barrel.  For one, we had spent the drive nibbling on leftover snacks from Mary's latest plane ride.  Second, the snacks were repeating on us; the road to Boron is a veritable roller-coaster ride of hills, bumps, and sudden drops.  Third, as stated above, my jeans were at maximum capacity and there just wasn't any room for even one more hamburger.  Most importantly though, the Barrel is "cash only" and we were fresh out of greenbacks.  Scrounging through the wacky wagon for change, we were able to dig up just enough for one refreshing lemonade (sorry, Mary).  If the two Yelp reviews (both from the same man) and expertly-rendered window painting are any indication of the quality at the Barrel, then diners can certainly expect to be well fed.


The very best part about the Barrel is that it is a legitimate twofer; immediately across the street, in an empty lot, lives a trio of large-scale, folk art, desert tortoises.  As if the townsfolk were expecting them to make a run for it, the tortoises are corralled between a split-rail fence and a cinderblock wall.  Thanks to years of gymnastics training, we were able to make it over said fence and frolic in the land of the giants.

It might seem disingenuous to feature a restaurant on a Chow Time Post at which we have not properly supped but our love for vernacular architecture is reason enough for us to say, "Roll out the Barrel!!!"  Plus, the odds are that if you're in Boron, you'll be patronizing the only game in town; it's like shooting fish in a...something.  By the way, when you're deep in the heart of the Mojave Desert, don't ever order the fish - even if it is from a barrel. 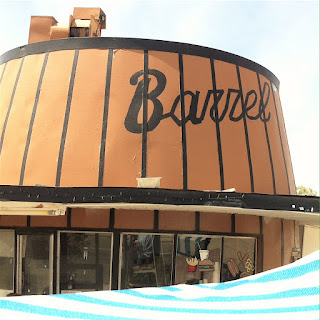