A day late and a dollar short is the most apt description of my participation in the world.  Fortunately, the kid sister needed a ride to the airport last week and my subsequent propinquity to Santa Monica, CA coincided with the last day of Love, Shirley Temple: The Exhibit.  As it turns out, the whole thing is about a lot more than 7Up and grenadine. 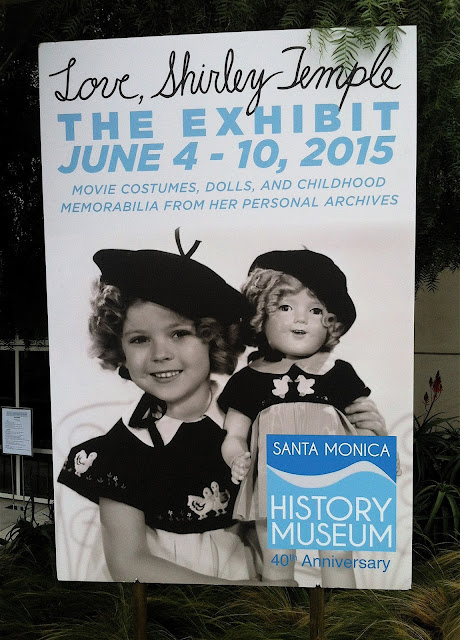 With Los Angeles as one of only five stops, the exhibit is sort of a traveling auction preview; it is the world's last chance to see the priceless collection of Shirley Temple's personal archives of "movie costumes, dolls, and childhood memorabilia" all in one place.  While small, the exhibit was crammed full of dimpled, 1930's nostalgia and moments of sincere disbelief that only a masking-tape line on the carpet separated me from my baser, "snatch-and-grab" tendencies.

I'm sure they have their reasons, but it seems a low-level tragedy for the Temple-Black heirs to separate such a comprehensive collection.  In all honesty, though, I had no idea that this collection even existed.  As it happens, Temple's mother stipulated in her studio contracts that the family would retain all of the costumes from Temple's productions.  The result is a wonderland for fans of Shirley, old Hollywood, and the history of cinematic costumery.

Everywhere one turned, there were more and more matinee memories.  I circled each room about ten times each to make sure I didn't miss anything.


As promised, the exhibit included more than costumes.  Letters, paintings, toys, record players, and other effect of young Miss Temple were carefully incorporated into the costume installations.


The exhibit was certainly a joyful exercise in nostalgia overload, but my favorite part of it all was the eavesdropping.  I entered the hall at the same time as a group of seniors who had just been dropped off by bus.  As they hobbled, wheeled, and "walkered" their way around the costumes, their eyes twinkled.  I was tickled by the chorus of "oohs" and "ahs," overjoyed at every memory shared of afternoon movies, tap-dance classes, dolls, and Shirley Temple scrapbooks.


It probably sounds corny, but it is no overstatement to credit a three-year-old girl with helping the world cope with the many indignities of the Great Depression.  The pint-sized dynamo captured the heart of the nation, taking audiences for an escapist adventure on the Good Ship Lollipop and beyond!

If you believe in that sort of thing, it is kind of nice to think of Shirley Temple-Black looking down upon us.  And while, as one of Heaven's newest ambassadors, she probably has more critical issues at hand, we hope that she is getting a thrill out of all the abiding love and good wishes still on Earth for Shirley Temple.