When I go on vacation - any vacation - I try to do my research.  Never knowing when the possibility of a return trip will make itself available, I hate going all the way to a different state/country only to return home, disappointed to learn that I missed a great landmark.  That being said, I pride myself on a flexible itinerary; I always leave plenty of time to explore aimlessly and ask locals for recommendations.  Usually, this results in some of my best travel experiences. 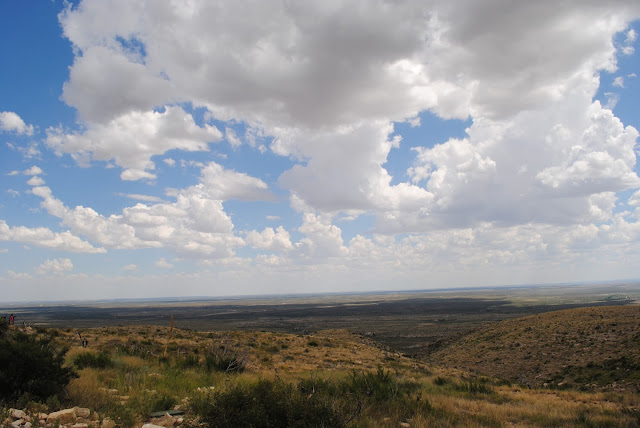 When I set out on my epic New Mexican adventure, I had mostly planned to hit up the wacky tacky highlights and help my sister put her new home in order.  Foolishly, I hadn't really considered how enchanted I would be by the land in the "Land of Enchantment."  New Mexico's landscape is wonderfully monotonous, wide swaths of pink and golden sand interrupted only by mesquite, sagebrush, and the endless trail of cruciform power poles.  The hazy silhouettes of the distant mountains create the perfect backdrop for some of the most intensely-blue skies I've ever seen.  The most spectacular of all are the clouds - REAL CLOUDS!!!  Living in drought-ridden Southern California, I'd forgotten the joys of staring at those puffy cumulonimbus and watching the heavenly shapes transform into a man punching a shark, or a juggling penguin, or a fire-breathing dragon in a dress (all images we saw on our car rides across the desert).  Seamlessly set into this idyllic Southwestern majesty are the dwellings of America's indigenous people.  Had we not left ourselves open to the possibility, I might have never lived out a childhood dream of climbing into the cliffside caves of the Pueblo People.

The only challenging aspect of the short hike out to the cliff dwellings at Bandelier National Monument is the oppressive summer heat.  Luckily, we had water, determination, and a slight breeze at our backs.  Logically aware that I am well out of shape (or well into a shape unnatural to the human race), sometimes all it takes a brisk pace at high altitudes to remind me that I need to get back on track.  The only redemption I found in my puddles of perspiration was that my very-fit brother-in-law seemed to be feeling the heat as well.  When we rounded a corner and caught our first glimpse of the cave dwellings, I realized that the pounding in my heart came not only from its first taste of exercise but also from the excitement of seeing such an incredible part of American history.

Soooo...it is entirely possible that I have been operating under a thirty-year misapprehension that cliff-dwelling Americans led the entirety of their existences perched up there in the cliffs.  I guess I hadn't applied a proper amount of thought to the realities of that particular lifestyle.  In fact, I tried not to act too surprised when we encountered the remnants of their land-based lives, including storage structures, reservoirs, and mills. 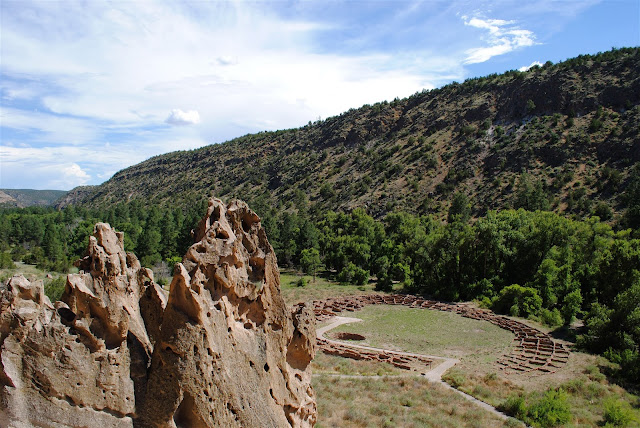 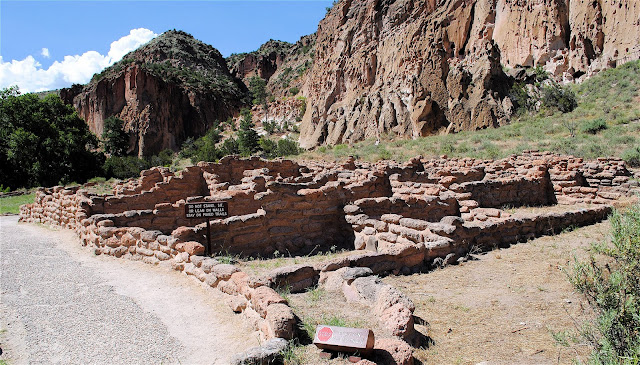 Perfectly contented to examine the ruins and see the caves from the relative safety of terra firma, we were ecstatic to learn that the cliff dwellings at Bandelier are INTERACTIVE!!!  At this national park, any cave at which stands a ladder is a cave open to exploration!


There is some combination of appreciating the ingenuity of indigenous people and the childlike desire to live in cave/clubhouse/treehouse that has always captured my imagination.


As we climbed ladder after ladder, we started to fancy ourselves cave connoisseurs, recognizing the nuances of cliffside dwelling.


Our visit to Bandelier National Monument culminated in a cool-down by the creek.  As it turns out, water is still a necessity - even for the cliff-dwelling people of New Mexico.  The peaceful flow of the water allowed even the youngest among our ranks to reflect on the importance of listening to traveler's intuition.


At this point, it should be obvious that the bulk of my "knowledge" (historical, cultural, geographical, and otherwise) comes from the hands of animators - most of them Disney.  Why then, should anyone be surprised to learn the cartoon that inspired my desire to see the cliff dwellings of New Mexico is set in Arizona's Grand Canyon?  However misguided my motivation, I believe anything that encourages us to get out from behind our electronic device, learn about our history, and explore the beautiful world is good, solid, and sound. 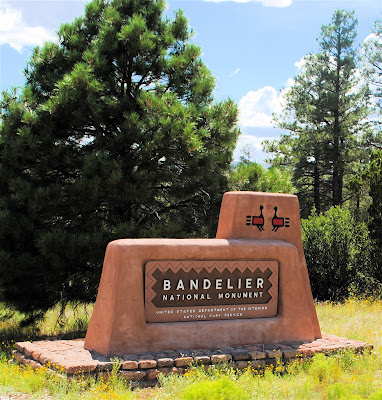