Nice of You to Drive-In! 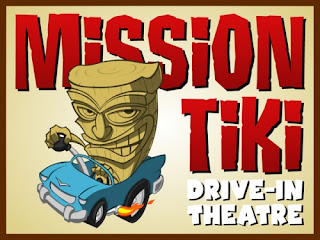 What is the mystique of a drive-in movie theater?  Is it the old-timey novelty?  Is it the comfort and convenience?  Is it the snack bar?  Or is it just the romance?  I didn't grow up around drive-in theaters so my formative years did not include late night, drive-in shenanigans.  To be fair, even if I did grow up around drive-in theaters, the activities of my formative years provide no indication that such shenanigans would have occured.  Maybe one day I will get to make out with someone at the drive-in.  Until then, I will just have to accept the fact that watching Cars 2 and Pirates of the Carribean: On Stranger Tides is about as wild as I'm going to get.  Whatever the appeal, Mission Tiki Drive-In Theatre does the drive-in experience right!  From the tiki-hut, ticket booths to the Moai Garden to the carved totems, the Mission Tiki is an oasis of wacky tacky in Montclair, CA.


I was first introduced to the Mission Tiki Drive-In Theater through my favorite (now defunct) summer event, Tiki Invasion.  Tiki Invasion was a car show, music festival, vintage drive-in, tiki culture extravaganza that sadly fizzled after only two events.  Spending a hot day vending our merchandise, terrorizing people on a mini-bike, getting sunburned, eating concession-stand grub, listening to great music and watching drive-in movie classics was my idea of summertime perfection.  I really hope the tiki gods, in their infinite wisom, smile on us and bring it back!

The Mission Tiki opened in 1956 and has operated continuously for over 50 years.  In my estimation, that is a tribute to the owner's courage in the face of changing attitudes, culture and economy.  I also applaud the people of Montclair for embracing the theater as part of their community and advocating for the drive-in with their attendance.   Needless to say, the theater has endured  many ups and downs over the years but when, in 1996, it received a tiki transformation, it sealed its place in the annals of wacky tacky landmarks.

Going to the drive-in was actually not on our to-do list - just a happy accident.  We arrived a little late for the first feature, Cars 2, so we carefully maneuvered the car over the drive-in's asphalt ridges, stealthily weaving our way between vehicles so as not bother the other patrons of the wacky tacky arts.  Because we missed the beginning, we didn't feel too committed to the film and decided that it was a good time to explore and take photos.  We were making full use of the facilities when Mary, that dainty little flower, decided she was too cold.  She gingerly tip-toed back to the car and with the delicacy of an angel managed to set off every flashing light, horn and siren that the car had to offer.  The best part was that the person with the keys was, shall we say, indisposed, so the laser-light spectacular continued for about five, glorious, retina-burning minutes.  Surprisingly, our apologies did not fall on deaf ears; we explained that it was actually an interactive, 3-D experience and our car was just part of the movie. 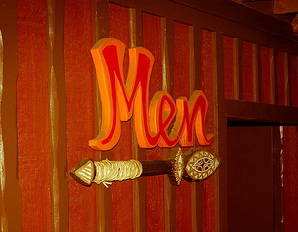 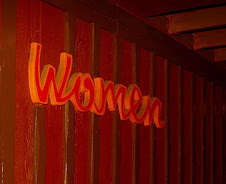 Imagine capturing the difference between men & women so precisely yet so succinctly.
(photos by Bea White)

The Mission Tiki also hosts a swap meet to which we have gone but cannot endorse with the wacky tacky seal - unless, of course, you are in the market for a public massage, drinking out of a coconut (it only sounds like a good idea - a childhood, cartoon dream destroyed, yech!), or various and sundry tools and/or international sweets.

One of my two favorite drive-in-movie-within-a-movie sequences is from Walt Disney's That Darn Cat (1965) starring my personal favorite, Hayley Mills and Dean Jones.  The other is from Pee Wee's Big Adventure; sadly, that clip however is nowhere to be found.  So, pretend you're in your car and enjoy the film!