This post would seem like one that could lend itself to being very short, sweet, and to the point.  How much could one possibly have to say about a recipe?

Well, the joke's on you if you keep reading; more than likely, this is going to be one long ramble built upon jumbled childhood memories that have translated into sordid adult neuroses.  Trust me, this recipe is delicious, but only incidental to the greater story.

I should begin you telling you that I AM THE COOKIE MONSTER!!! Which, it turns out, runs in the family.  My two-year-old nephew recently asked me for a cookie and when I handed it (half a graham cracker) to him, he took it and, while mashing it into his face, said, "Cookie, nom, nom, nom, nom, nom."  It was hilarious to me because he doesn't have a lot of tricks and the surprise of the new behavior had me rolling on the floor!

Cookies of all kinds (generally not of the store-bought or jam-filled variety) make me the jolly (read overstuffed) person that you have come to know.  Of all the dessert possibilities, I will always gravitate towards cookies.  My favorites?  Chocolate chip-less (a brown sugar cookie), sugar (with sugar sprinkles), snickerdoodle, oatmeal/chocolate chip/date/walnut (a grandma classic), shortbread, biscotti, lemon, Mexican/Italian/Greek wedding...I could go on. 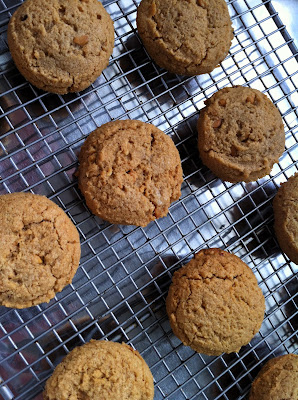 I don't have a very good memory (part of the reason I started this blog) and memories from my childhood are hazy at the best of times.  My love of cookies and the forthcoming recipe are based on two very distinct memories from my formative years that are fundamental to the type of adult I have become.

The first story is one of embarrassment.  Keep in mind that this story was probably only embarrassing to me and actually comes in a distant second for most embarrassing sleepover story.  In the second grade I was invited to spend the night at a friend's house.  The thrill of sleeping at anyone else's house but my own filled me with equal parts joy and dread.  On one hand, while I would still be sharing a room, instead of my dumb old brothers it would be with a cool friend.  On the other hand, as a natural born worrier, I could clearly see the folly of being so far from my parent's room were I to have a bad dream.  I made it through the night okay and joined in the revelry of my friend and his siblings when their mom announced that the breakfast menu would feature french toast!  We sat at the table grinning like idiots at the sheer joy of promised french toast.  Their mom set the first plate of food before me and after thanking her, I looked around and uttered the words that no gracious guest should ever speak, "Where's the peanut butter?"  The sound of a pin dropping would have easily shattered the eardrums of anyone close enough to hear my foolish query.  Where's the peanut butter?!?!?!!  (Here's the part where I mention that I didn't realize that we were the only family in the entire world who puts peanut butter on french toast - which actually explains a lot about our family).  Trust me, it only seems strange when you are confronted with the realization that this flavor profile (peanut butter AND maple syrup) is unique to you.  Everyone else at the table happily spread their toast with a healthy portion of butter and doused the whole thing in syrup; if I recall correctly, powdered sugar may have been a key player as well.  As embarrassed as I was, I begrudgingly ate my french toast in the fashion of my friend's family, as not even an ounce of peanut butter was proffered.  Needless to say, I never spent the night at that friend's house again - not because I wasn't invited, but because I knew that the demands of my sophisticated tastes could never me met in such a house.

The second story is one of humility.  When I was of the appropriate age (I can't remember exactly), I was in Cub Scouts (not by choice).  Every week one of the kids was assigned to bring a treat for the group (den? pack?).  Translation, some poor kid's mom had to take time out of her schedule to prepare snacks for a bunch of creepy, uniformed kids that she didn't care about.  When it was my turn, I hesitated telling my mom because even as a child, I knew it would stress her out.  How thoughtful of me!  What a relief it must have been for her to be spared that information until the morning of the meeting when she was racing to get all her own kids off to school.  She handled the devastating news like a real trouper, and told me that she still had enough time to make chocolate-covered graham crackers.  Chocolate covered graham crackers?!?!?! The embarrassment of such a low-brow confection left a huge knot in my stomach. All day long I tried to use the powers of my mind to get the clock to work in reverse but no such luck.  I anxiously counted down the hours until school let out and the cub scout meeting began.  Really, chocolate-covered graham crackers?  I could just picture the den mother removing the lid from the Tupperware and, upon seeing the humble, homemade treats, sneering at me and saying, "What are you, poor?"  Who would eat chocolate covered graham crackers besides us anyway?  They were just something my mom made up when we didn't have cookies, right?  There is no way that other kids would "get it;" they would just think we were weird.  After the great peanut butter boondoggle, I was a little gun shy anyway, and I knew these choco-grahams would seal my fate as a first-class freak.

When the time came for the meeting I slipped out the front door unnoticed, "accidentally" leaving the container of misbegotten sweets behind.  I figured that it would be so much easier to sheepishly explain that I had forgotten the treats than it would be to endure the tireless ridicule that would deservedly come from being "the kid who brought chocolate-covered graham crackers."  The den mother accepted my lie without hesitation and said that she could easily whip something up for my ravenous group of would-be tormentors.  She went into the kitchen and I breathed the sigh of a pardoned criminal as every part of my fiendish plan started falling into place.  After a short time the den mother returned with the afternoon's refreshments.  The anticipation of what was to come had built to a deafening crescendo; the greedy fingers of the cub scouts readied themselves for what was sure to be the penultimate cub scout treat - the legend of which I was sure they would certainly regale their children and even their children's children.  Sweat dripped from my brow as I pawed at my kerchief which seemed to be tightening around my neck with each passing second.  Every bit of air vanished from the room as the den mother unveiled her masterpiece - CHOCOLATE-COVERED GRAHAM CRACKERS!!!

Lessons learned:  One, not everybody eats the way that you do, so don't go out into the world with the expectation that they do.  Two, listen to your mom.  Three, everybody eats weird combinations of food, so be proud of your weird cookies and don't be afraid to share your recipes with the world.  In an effort to "share my weird cookies,"  I offer you Maple-Glazed Peanut Butter Cookies!  This peanut butter cookie recipe (pre-glaze) is one that has been passed down in our family.  It is flourless (pretty hip) and because it is so simple and tasty, it is the only recipe that we use for peanut butter cookies. 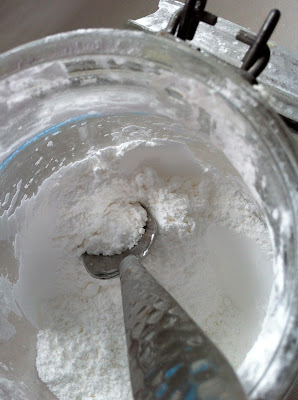 Thoroughly mix all ingredients and scoop (I use a small ice cream scoop) onto a prepared cookie sheet.  Bake at 350 degrees for approx. 12 minutes.  Let the cookies set up for a few minutes (they tend to fall apart if you remove them from the cookie sheet right away.  Yields about 18 cookies. 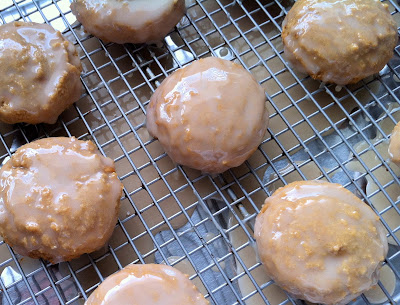 Glaze (this is mostly a guess, you should know by now that I don't like exact recipes):

Sift confectioner's sugar to break up any lumps and beat in maple syrup and milk. Place the partially-cooled cookies on a wire rack and spoon the glaze over the cookies to coat them completely.  If you can control yourself, allow the glaze to set and then DIG IN!!! 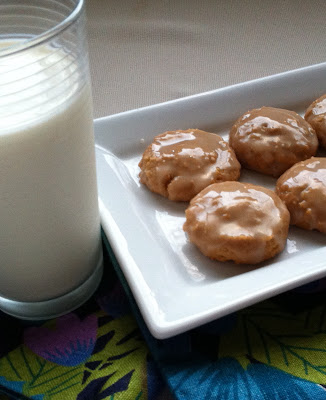 I know the peanut butter/maple flavor profile might seem odd at first, but once you try the taste sensation, you'll realize that it is a combination made in fat kid heaven and you won't be able to think of peanut butter in the same way again!  As a fair warning, there is enough sugar per ounce in these suckers to make your teeth spontaneously fall out of your face.  So, if you're a dentist, a diabetic, or just not feeling so adventurous, the cookies can definitely be enjoyed glaze free as is or with the delicious addition of chocolate chips (a major crowd pleaser).  Remember, if you do try the recipe, please be sure to let me know how everything turns out.