After spending so much time scanning the horizon for the strange and exciting in this world, I feel like I have been blessed with a divining rod for the wacky tacky.  Sometimes we don't even have to search; led by some greater force, the wacky tacky is simply thrust upon us!  Such was the case this weekend when on a scenic drive through our coastal communities, we stumbled upon the Tiki Apartments in Redondo Beach, CA. 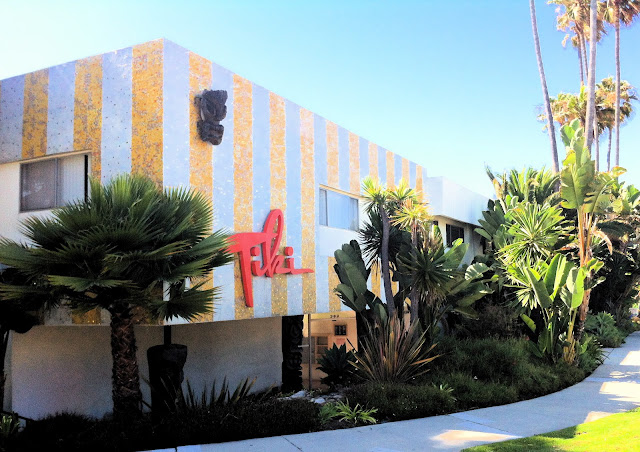 I have never loved apartment living.  There is something a little claustrophobic to me about shared walls, and something a little unnerving about footsteps on the ceiling.  The Tiki Apartments might provide enough Mai Tai magic to cure me of my phobia. 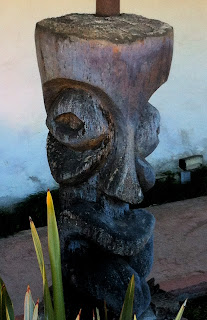 Providing a watchful eye over the tenants, these
tiki gods line the walkway into the complex.

It came at the cost of several pedestrians (who should have known to jump out of the way when they saw us jumping the median), but I'm sure they were more than thrilled to make the sacrifice so we could manage throw the wacky wagon in park and get some pictures of this inspired island of Polynesian pop.  There was so much to love about this place - the outrageous, orange,  "Tiki" script, the lush landscape, the tikis themselves - but one of my favorite parts was the multicolor/metallic/iridescent mosaic tiles that created bold stripes on the facade of the building.

Surrounded by The High Tide, The Sea Gull, The Shore Break and many other ocean-themed apartments, the Tiki, and its sister buildings, prove that a little theming goes a long way in making a generic, mid-Century apartment complex something wonderful, wild, and wacky tacky.


Having grown up a very short distance from the Ala Moana Apartments, a fantastically tiki-styled building marked by an extreme A-frame entryway, there was no reason for me to be so mesmerized by the south seas theming of these apartments, but the Tiki is just so glittering and glamorous.  Although there were two people silently soaking in the sun poolside, from somewhere, probably drifting in on the ocean breeze, we could hear a hula.

Did we mention that this place is just a short walk from the beach?  Where's my muumuu, I'm ready to move in!! 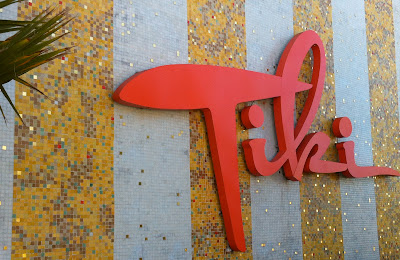