Kitsch-en Kounter: "Give Me LIBERTY [Jell-O] or Give Me Death!!!"

Call it a fixation, if you must, but there is nothing wrong with a grown man constantly thinking about the evolutionary trajectory of a Barbie/princess cake.

Left with the other half of the doll that I used for the groom's legs (above), I pondered the potential for the remaining torso, arms, and head.  This year it was clear that we should celebrate that bastion of hope and freedom, The Statue of Liberty.  With a Barbie cake always on my mind, I was confident I had at least one half (the top half) of our 4th of July Kitsch-en Kounter recipe all ready to go.


Cake would have been the obvious choice for Liberty's nether regions but I wanted something that truly screamed 4th of July!!!  Instead of cake, I decided to further along the Barbie cake's evolution by once again exploring the possibilities of America's favorite gelatinous food medium - Jell-O.

Up until this point, I had everything I needed on-hand to complete the craft/recipe.  Strangely enough, I hadn't considered a mold.  And what would a Jell-O mold be, after all, without a mold?  That's right...just Jell-O.

After much ferreting around in the deep recesses of the cupboards, I came up empty handed.  I needed a Jell-O mold with some height and a bit of movement and texture to evoke the sweeping skirts of our statuesque inspiration.  And then a strange thing happened; I remembered the best-selling vase from the home-furnishings retailer in which I worked many years ago.  It was the correct height and had the organic fluting that I wanted.  With no hope of finding the vase, I resigned myself to a hopeless search through the local thrift stores for something that might work.  Believe it or not, the very first store into which I set foot yielded the exact vase for which I was looking - an unprecedented bit of good luck!!! 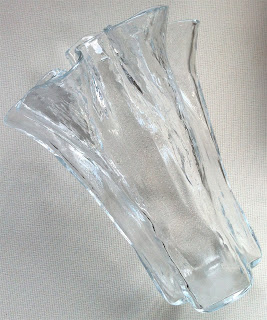 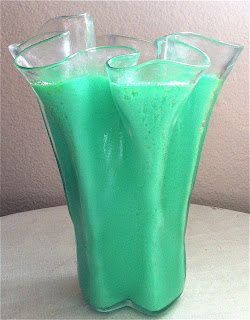 Sometimes I wish my luck would operate on a grander scale...but for today, I suppose this will do.


Given that this was a glass vase (with a thick-sham base and all that fluting) rather than an aluminum Jell-O mold, I was more than slightly nervous about un-molding my creation.  After 24 hours in the fridge, I gingerly set the vase into a sink full of warm water and said a quick prayer to the statue's first sculptor, Frédéric Auguste Bartholdi.

Just like Bartholdi and the French government before me, it had come time to assemble my statue and present it as a gift to the people of America - but not without some finishing touches. 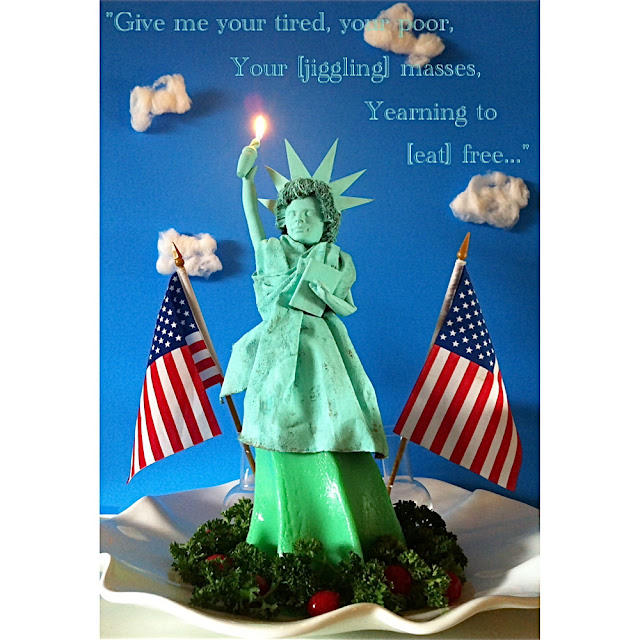 "Give me your tired, your poor,
Your [jiggling] masses, yearning to [eat] free..."