Saturday, October 27, was the day that everything happened.  Every Halloween party on the face of the earth was that day and unfortunately, we weren't able to attend them all because we had a parade to go to! 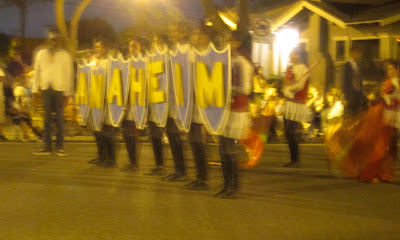 Every year for the past 88 years, a major thoroughfare in Anaheim, CA has been closed to traffic so spooks and ghouls can haunt the residents of that community.  Fortunately, our pals Bob and Amber live on the very street where the parade is held so we get front row seats.  Unfortunately, as you are well aware, I am terrible with photography, so my photos of said parade are pretty awful (I choose to believe some evil spirit overtook my camera).


Usually, Amber and Bob's parade festivities include elaborate costumes and hordes of revelers.  They, however, were making preparations for their Australian musical debut, so the action was relatively low key.  Food is never left out of the equation.

The parade is the perfect example of small-town American spirit still thriving.  Even though Anaheim is a bustling center of industry and tourism, its residents haven't neglected their heritage and the parade teems with old-timey charm and all the usual suspects.


This year we had a vested interest in the parade.  Mary took part in The Anaheim Historical Society's parade entry; based on a photograph from the parade in 1953, they recreated "The Flying Sasser!"


I apologize for the crummy photos.  Maybe one day, I'll figure out the settings on my camera (but probably not).  Until then, I hope you have a very safe and very HAPPY HALLOWEEN!!!  Stay tuned for our next Halloween post - the costumes!!!

And as I can't let you get away without some mandatory Halloween viewing here is "The Legend of Sleepy Hollow" as performed by Bing Crosby.