This post is bound to get me in deep "caca" with my sister-in-law, our resident expert on Mexican food/heritage/culture/arts.  Developing a new recipe based on one of Mexico's greatest dietary legacies should have warranted a consultation; however, when culinary inspiration strikes, even familial ties must be cast by the wayside in order to perfect the next big taste sensation.  Forgive me sis...

One part of Southern California's greatness is its propinquity to Mexico.  Members of California's relatively-minute Minteman population would probably take great umbrage with that statement until caught stuffing their greedy faces with carne asada tacos and holiday tamales. 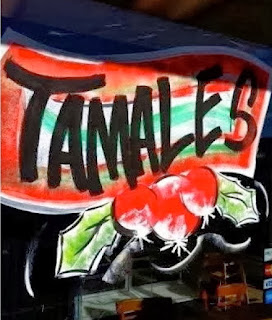 Just about every friend of mine either born in Mexico or born of Mexican heritage (and plenty born in/of neither) look forward to the holiday season with singular purpose; the holidays mean one thing - TAMALES!  Every year, the production line begins with the preparation of the masa, the soaked corn husks, the various fillings, the wrapping, the steaming, and ends with empty plates and distended, yet grateful, bellies.  This year we missed the opportunity to attend any pre-Christmas tamale parties, leaving a gaping hole in my holiday and my heart.

Convinced that all of the other coronary-inducing food I've ingested this season was simply not enough, I determined that Mr. Tiny's Tamale Shop needed to hang its shingle.  I'd been kicking a few ideas around of interesting tamale fillings but could not get past the concept of a Mexican Corn Dog - a HOT (Dog) TAMALE!


Halfway through the process I started thinking that perhaps it would be best to leave the cooking of "authentic" Mexican cuisine to authorities on the subject; then I thought better of it.  wacky tacky always wishes to push the corn husk a little bit further and build on the interesting culinary traditions of other cultures.  At the very least, we can help people who don't live in the land of Mexican plenty to understand that food from south of the border is far more than tacos, enchiladas, and beans.


"Tacos, Enchiladas, and Beans" - Doris Day
(This is some kind of promotional video for a restaurant/food distributor
or something, but it was the only video on youtube for this song)

My sis-in-law and I can agree on a number of major issues but I seriously doubt that we'll ever be on exactly the same page when it comes to tamales - or tacos, enchiladas, and beans.  Buen Provecho and Feliz Año Nuevo!